Marike of Bright Cam Productions in Worcester and I got together to do a shoot at my studio, we titled it “Film Photography – Large Format – Photographer Shoots Photographer“. This was a fun shoot, as photographers we are usually the ones behind the camera, giving direction, setting up the shot, adjusting lighting and poses. I decided that it would be fitting for us to do this in large format as it is next level compared to digital. We did indeed shoot a few digital images, but the main focus was film. As it has been rather cold here, we agreed on shooting in black & white, showing textures and patterns, and a bit of winter fuzzy warmth with scarves and jerseys.

After my previous studio shoot with Mornay, Marike and I used my constant lighting by Godox for this shoot. The lights that I am using are the Godox SL-200 LED Video Light (Daylight-Balanced). As the name implies this is video lighting. Any user of large format photography will know that these big boxes with bellows and a lens need lots of light, and they are certainly usable, but there is no substitute for studio flash lighting when shooting indoors unless you have very good natural lighting or more powerful 2000W fresnel lighting that can be used to give the Hollywood lighting effect.

I have used set.a.light 3D STUDIO to recreate my studio setup. This is a fantastic tool for planning any studio shoot without having to go to the studio, everything is done on the computer and the results are real-time and precise. We did not need to do this for this shoot, as we both knew what we were looking for, this is purely to show what we did to get some of our results. The lighting setup did change during our shoot.

Kodak Professional Portra 160 film features a significantly finer grain structure for improved scanning and enlargement capability in today’s workflow while retaining the exceptionally smooth and natural skin tone reproduction that the PORTRA Film family is renowned for.
It is the ideal choice for portrait, fashion, and commercial photography, either in the studio or on location.

I have had some BERGGER Pancro 400 4×5 film in my fridge for some time now and recently bought some 8×10 sheets. BERGGER Pancro 400 is a photographic black and white, high speed, and fine grain film. Exposed at ISO 400, it delivers premium quality pictures. Pancro 400 has a panchromatic double emulsion, consisting of silver bromide and silver iodide, which are primarily differentiated by their grain size. This means that it achieves an improved exposure latitude. This was the first time for me to shoot this film and I must say that I am well pleased with it. It has a classic look, grain and feel to it, and was very easy to develop in Ilford ID 11 in a 1+1 solution for 17 minutes at 20°C.

What I really liked about the film, was during editing that I did not have to clean up as many film flaws where one would get fluff or specks that would detract from the image. My editing is minimal for film which is my choice. Some people are happy to edit heavily, others prefer all the flaws and imperfections, I keep it minimal, I see myself more of a hybrid shooter of film and not a purist.

What does this mean?

Since you are using a “4×5” or large format “sensor”, your camera isn’t going to crop anything. When using large format lenses, they are designed to cover the larger sensor, but with the larger image circle, the field of view also widens. Your “4×5” sensor has a “crop factor” of “0.27” meaning you must multiply your focal length by this number to get the new field of view.

Just as your field of view widens, so does your perceived aperture. Although your lens is “f/11” it will have the equivalent depth of field to an “f/2.97” lens. The amount of light your lens lets in will not change, only the depth of field or the “blurry part” of the image.

This is a super basic explanation of large format crop factor and how it affects your lens. This is why it is critical that you nail focus every time and your subject doesn’t move! On an 8×10 camera, this 240mm lens becomes a wide-angle 31.2mm f/1.43 lens equivalent in 35mm terms. A 450mm f/9 is a typical 8×10 portrait lens.

The next image could be a timeless image as the clothing and camera – a 6×6 medium format model, might not have the person dated in the right era.

It was Marike’s turn behind the camera where she shot two frames on BERGGER Pancro 400. She also took some digital shots which can be seen in the gallery.

Marike’s Experience In The Studio:

Craig asked me to do a collaboration shoot with him in his studio using his Large Format Film and I was very keen on joining him with this request. When he wanted to use me as the model, I hesitated a bit, because I am used to being behind the camera and not in front of the camera lens. But he assured me that we are going to keep it very natural and informal so I can just be myself. And that is exactly what I did.

Craig was very open and down to earth and made me feel very relaxed and confident posing in front of him. He allowed me to also be spontaneous as long as I didn’t move to0 much which would result in a blurry photo.

Doing the whole studio setup and getting the camera and film ready, brought back a lot of good memories from when I used to be a photography student at Vega. We also learned about film photography and I always found it very fascinating and wished that one day I would also have my own darkroom to develop my own film as a hobby. Of course, Craig’s film work is much more on a professional level and I can see he really loves doing what he does and he puts in a lot of effort to get the best results.

We played around with different outfits, poses, lighting setups and he even allowed me to take a few shots of him on his Large Format Film Camera. I felt a bit out of my comfort zone because it’s not every day you get to privilege to work with such a timeless and classic camera. But he guided me along the process and luckily I managed to get two good shots of him on film.

I really enjoyed working with Craig and I would definitely recommend him if anyone would like to experience being captured on film and having a good quality print to hang on your walls to cherish.

Hope we can do this again sometime!

What I really liked about this film, was during editing that I did not have to clean up as many film flaws where one would get fluff or specks that would detract from the image. My editing is minimal for film which is my choice.

This is a timeless shot that really worked well, and I like too. For the main light, I used a light with a reflector dish and an 18° Grid from camera right and a 180cm umbrella fill light from the left. I really like the fine grain of Kodak Professional T-Max 100 which I develop in Ilford ID 11 in a 1+3 solution for 14 mins along with some T-max 400 with no issues. T-max 400 is supposed to be a 15 minute development time.

The images are of a high-resolution nature and may take time to load. Click either on the advance arrow or on the image itself to view it as a large single image.

This was primarily a large format studio shoot, and some digitals were taken as well. These are the images we took of each other. 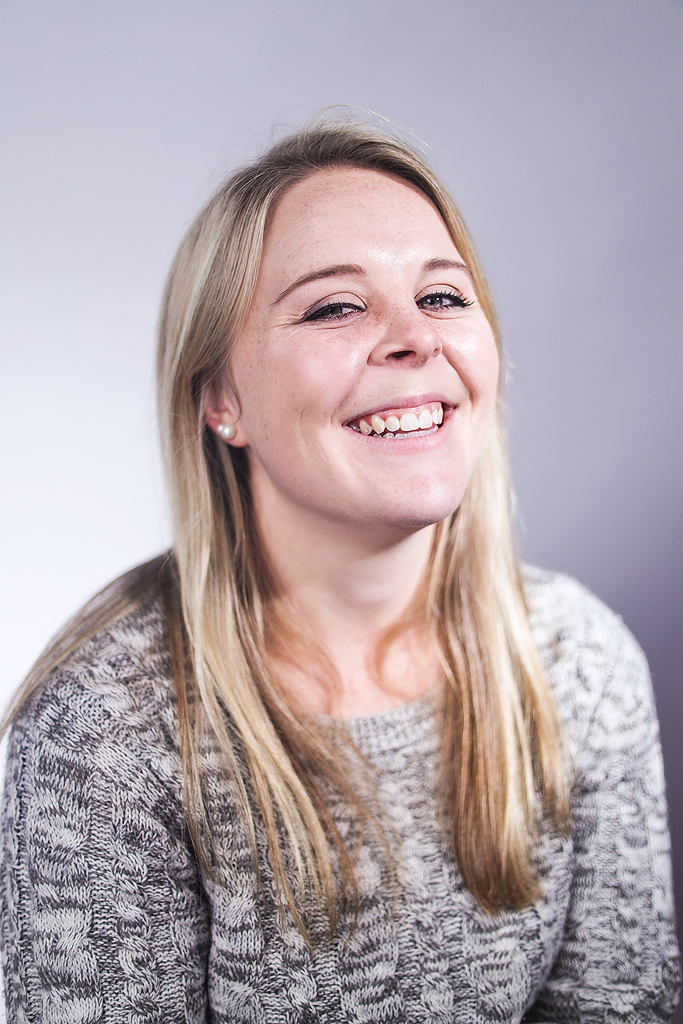 What I really liked about the film, was during editing that I did not have to clean up as many film flaws where one would get fluff or specks that would detract from the image. My editing is minimal for film which is my choice. 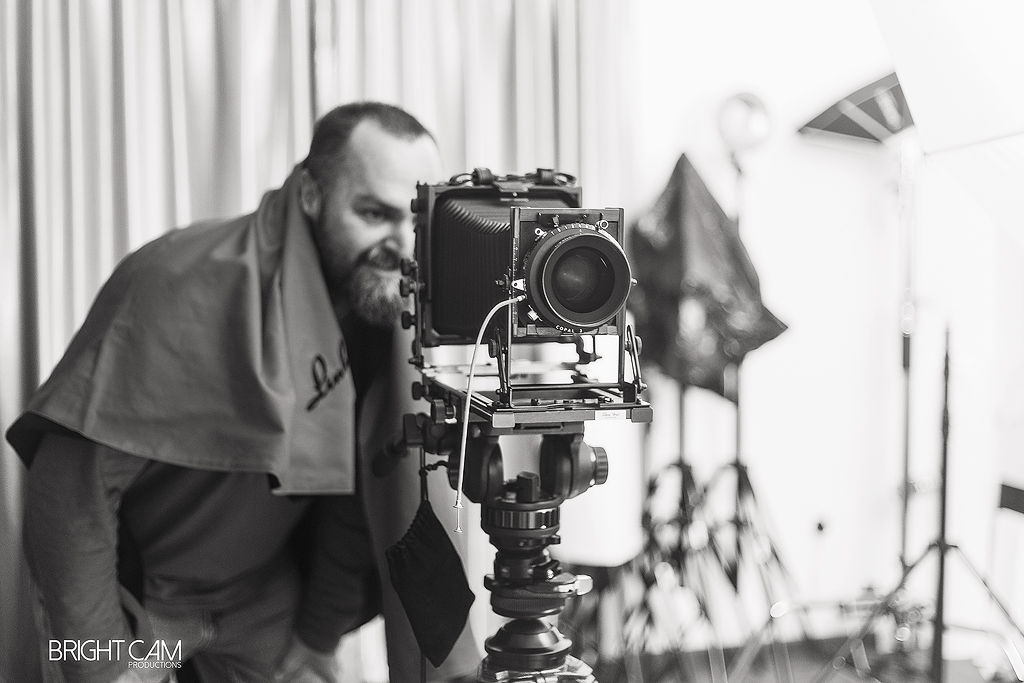 Marike has shot large format during her studies and had the opportunity to load film, shoot in the studio, mix the chemicals, and developing the film sheets in a dark room. All our images came out which is a winner. She is a lovely person to work with and thanks again for the day in the studio which was fun! Large Format – Photographer Shoots Photographer

It is one thing to a photographer and another to be either a client or a model, those that can do self-portraits well are exceptional! Personally, I feel way more comfortable behind the camera, that is my happy space.

Again I am very happy with how the results turned out, it is always a good day out when everything runs smoothly, and after developing you have images. It never gets old when you open the Paterson tank and your negatives look good! Negatives were scanned on my Epson V750 at 3200dpi, Photoshop file sizes are around 750Mb to over 1Gb as a working file. If you would like to join me to shoot some film photography – large format in the studio, or any other environment, get in touch! I can teach you all I know, sign up for one of my one-on-one photo workshops.

My work has been published several times in SA4x4, HIGH LIFE (British Airways Magazine), Getaway Magazine, Wildside Magazine and Weg!/go! Magazine. I finished as a Top Ten finalist in the 2016 Getaway Magazine Gallery Competition, finishing with Highly Commended. The South-African national news broadcaster eNCA has also made use of video footage that I have produced.

Large Format In The Studio – Mornay